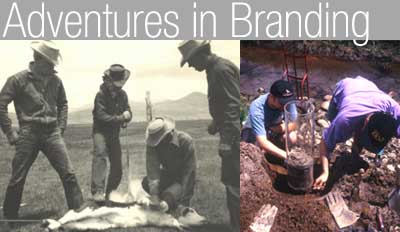 The client had previously popped by for a progress report so we had a chance to show them the research we’d done so far. The research covered a wide cross section of visual references that all came from the words and themes discussed in our last session. It was good to have the client witness this part of the process even though we hadn’t planned on it, since it not only showed them we knew what we were doing, but it also gave us a chance to refine our experimentation and focus our efforts on the directions the client immediately responded to.

As the exploration process continued the brand’s personality began to solidify in our minds, so we found ourselves making more of our own creative judgments rather than waiting on specific feedback from the client. This paid off at our next scheduled meeting as we presented the marks we thought were relevant to what they wanted. The variety of options generally communicated the same theme, but we needed the client to give us clues on the subtleties that would make this mark theirs.

They chose 4 directions they liked at first, planning to explore them further with specific tweaks here and there. However, as we talked about potential usages, the client got more and more excited about one particular option, even to the point of ruling out the other 3 semi-finalists. (Not usual, but it’s great when that happens). There were a few minor tweaks the client wanted to see so our next step will be to incorporate those small changes then deal with the addition of type.