Drawing from sources independent of the medium yields original results. 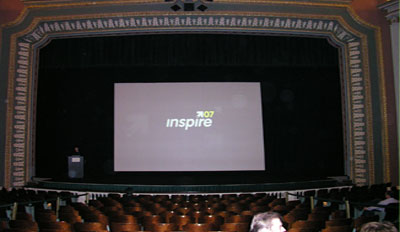 The aim of the Inspire07 symposium, held this past Friday, was to spur the attendants on to higher heights of creativity and I’d say “mission accomplished.” There was a lot of emphasis on the artistic side of this art form we call motion graphics, which was good since I tend to get bogged down with the technical how-to’s of the tools. I wanted to touch on a few of the themes that stood out to me.

Drawing from sources independent of the medium yields original results.
Sure you could copy Shilo’s use of vignettes and lens flares and get a similarly cool looking spot, but using trendy techniques won’t hide an unoriginal idea for long. I suppose that’s how techniques become trendy, but what I got from Inspire was, don’t settle for trendy; go for unique. Copying the latest tutorials (even though that has it’s place) will only get you to a certain point of proficiency with the tool. Unique comes when you’ve absorbed elements from diverse sources (e.g. poetry) and used them as starting points for exploration rather than what’s under the filter menu. One of the presenters (I think it was Jason Whitmore) even compared motion graphics with the act of creating music. What happens when you pigeon-hole yourself to coming up with software tricks is that you limit your creative possibilities. Then you’ll relegate yourself to a life of watching studios like Exopolis’ next project and wondering “why didn’t I think of that?” Creativity can’t thrive in a vacuum.

One source can spawn a myriad of creative expressions.
Nature seems to be a popular muse with artists and motion graphics artists are no different. Jacob Trollback and Marco Spear of Psyop showed examples of how elements from the natural world lead to stunning work. The pieces ranged from the simplicity of a flame (Trollback’s work for the TED conference) to the overwhelming complexity of swarming crows (Psyop’s spot for MTVHD). 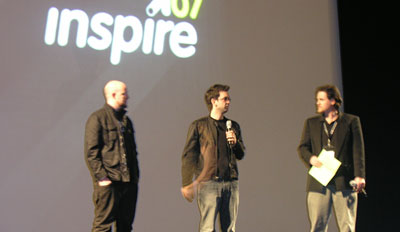 The medium’s just a tool for the storytelling.
A lot, if not all, of the studios who presented displayed a wide breadth of techniques in their work. 3D, stop-motion, cell animation & live-action were all utilized to some degree. However, at the end of the day, we all share in the time honored tradition of storytelling and those techniques are simply a means to an end. The session with Andre Stringer and Jose Gomez of Shilo really drove the point home that the tools we use, and how pretty the final product looks, are secondary to how well the it communicates.

Play
What makes motion graphics (or any artistic discipline for that matter) so much fun is the fact that a major part of our work is play. We experiment with and explore possibilities, even if the directions taken don’t seem directly linked to the project at hand. In the first session of the day, Marco Spears outlined Psyop’s creative process using their piece “Crows” as an example. The first thing they did was visual research and then played around with possible visual themes until something rose to the surface. As Michelangelo once said, “A man paints with his brains and not with his hands,  and the best way to do that is to let the brain run free for a while.

Down-time
I was glad to hear Jason Whitmore and Brien Holman from Exopolis talk about the importance of down-time away from the office and the computer, allowing themselves time to relax. There’ll always be those times when all-nighters are required to meet deadlines, but we too often sacrifice the rest of our lives for the sake of the reel. A lot of the presenters mentioned they had interests before they got into motion graphics and that they maintain those interests (music being a key one) to help keep a healthy balance in their lives. 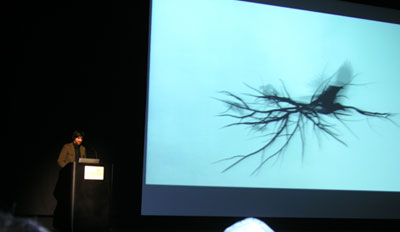 I definitely left last Friday feeling motivated, but also a little bit more connected (and slightly inebriated, much love to Media Temple for the open bar). Living in Savannah, it’s easy to let the outsider status get to you. For a long time my only interaction with some of the great work that’s out there was on the other side of the screen or monitor. So it was great to put faces to projects and feel like I was part of the mogra fraternity. As Phil,my creative partner, put it “In the end, I found it was all about love. Love of the art, love of the soul, and love of the natural world. I left with a sense of wonder that could be described as childlike. Then the Thai food caught up with me and I had to hurry home…quickly.”
But that was just our experience, I’d love to hear what other people took away from it.

Night of The Living Trekkies

Some Stop Motion to Blow your mind

Night of The Living Trekkies

Some Stop Motion to Blow your mind

Bla.st! Why didn't I think of that?

The Mini-stry of Mini Pt 2