TV 2.0: Programming for the ADD Gener…Ooh is That a New Pilot?

Getting the viewers involved. 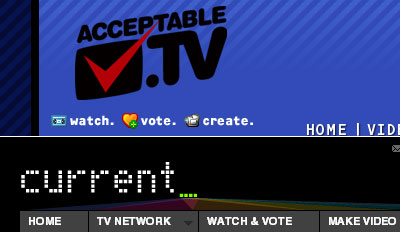 For those of you who haven’t watched cable over the last few weeks, VH1 has launched a new type of TV show called Acceptable TV. Think SNL meets American Idol. The basic premise is that viewers vote for their favorite short skit (called pilots on the show) to be continued throughout the rest of the season.

I said it’s a new type of TV show but really it’s not completely unprecedented. Current TV has been around for since 2005 doing a similar thing, even opening the creation of their advertising to viewers.

For those of you who didn’t know, (like me 2 minutes ago before reading the mental floss blog) the origins of Acceptable TV came from Channel 101 a grass roots event still held in L.A. with the same format. Except the voting viewers are a live audience.

It’s a sign of the times, everything’s going 2.0. Web sites, Superbowl ads, TV programming, .. what’s the next activity that will fall prey to the user-generated revolution? My theory is that it started with those Choose your adventure books. Who knew they’d be so groundbreaking?

Nominees for the "Worst TV Commercials Ever" Awards

Nominees for the "Worst TV Commercials Ever" Awards

Putting the Restaurant in the Aquarium

Where's the Next Top Graphic/Web/Motion Designer?