An inspiring and intellectually stimulating lecture. 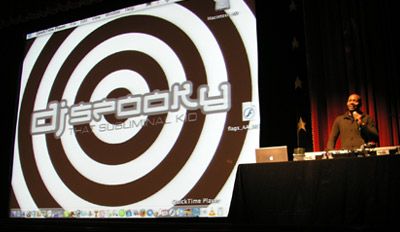 Paul Miller aka DJ Spooky That Subliminal Kid gave a fantastic lecture last night at SCAD, titled Rhythm Science after his book by the same name. I’m not sure what I was expecting, but I was definitely not prepared to be THAT inspired and intellectually stimulated.

First of all, he handed out CDs as gifts to everyone in the entire audience.

Not glossy mass-produced CDs. These were CDs burned from his computer.

Each held 1 of 4 mixes of different types of music, with stickers on them to identify their contents. Stuffed into each CD sleeve was a collection of a few stickers. His reason for this was to give the audience a tangible element to demonstrate his ideas: that we’d share the CDs with one another, burning copies of the versions we had, to exchange them for the versions we did not, and that we’d do the same with the stickers. Why? Well I’ll get to that in a bit.

I went to the lecture because a friend of mine is a fan; she’d been to one of his shows a number of years ago in Johannesburg. I did a bit of research and it seemed interesting enough. I figured I’d hear some clever mixing and scratching and I’d go home happy. Instead, Paul presented material to frame his philosophical arguments and questions about art vs. artifact and the importance of memory. He talked about the idea of taking existing ideas, sounds and media and remixing them to create something new and different, not only for the sake of entertainment, but also for the progression of ideas in science, art, technology (The idea of a DJ layering elements of sound over one another, being a perfect metaphor for the evolution of culture and creative thought in society).The idea that we as individuals pull fragments together to create our own world view and ideology.

Only he said it much more eloquently, referencing philosophers, scientists and artists throughout the ages. Mind you, had I known of his background in philosophy and French literature I might have had a bit of a clue. Suffice it to say I was impressed, and even though some of his references flew over my head, I loved the idea that sampling is the very technique that moves thought forward, and that the intersection of seemingly unrelated elements generates the most brilliant concepts.

I was expecting to see a DJ and instead I found a profound artist.

Back to the CDs. Paul’s very intention is that by giving us the material, it would then spawn its own set of remixes and interactions, thus creating something new. (He’s very web 2.0 this guy. In fact he referenced the phenomenon of social media a number of times.) He referred to sound as being fluid, and he perpetuates that concept in his approach to his art.

We left the lecture in deep conversation. This is what great art, music, thought and ideas should do…generate more art, more music, more thought, more ideas.

Tonight DJ Spooky will be performing “Subliminal Strings” with Bora Yoon. I’m looking forward to it!

A Creative Community at Work

A Creative Community at Work