Are we too idealistic? 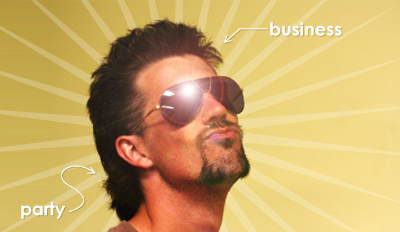 It’s disappointing how many examples of corrupt corporate culture appear to be in the world. I know nothing can be perfect, and god knows I certainly don’t claim to be the perfect at what I do, but it means a lot to me that my 2 business partners are the same folks that I love to spend my time off with. Not because we talk about work (which we don’t…OK sometimes), but because we have such a good time working together and truly care for and respect each other. We’re family. Sappy I know…but it’s the truth. And I’ve discovered more and more that this is not as common as it should be.

Now I am the first to say that we’re relatively new to the whole owning-your-own-firm thing (6 years), so it can be argued that things will change over time, and eventually we’ll have to become “serious” and all about the bottom line. I shiver to even think about this…I’d rather be growing potatoes. The day when I can’t run into Drew or Phil’s office with a joke that gets over-the-top gales of laughter and unwarranted high-fives, will be a a sad one. Worse yet, the day when I won’t spare a few extra minutes off-the-clock, talking to a client who is having a bad day and just needs someone to listen. Not that we can afford to shoot the breeze all day long, but we don’t mind making up for a bit of lost time at the end of the day if it means a friend feels like someone cared about them. Can we be successful and still do this? Well I imagine it depends upon your definition of success.

We recently began a design project for a client who is a tv personality. When you see her on tv, you get the feeling that she is sweet-as-can-be, very warm and overall just a lovely human being. Tv being what it is, you never know what to expect when you meet someone like that. I figured that if we did meet her in person, we’d get a chance to figure that out for ourselves. Without having had the opportunity to meet her, we’ve already learned that she is as genuine as caring as she appears. How? Because the corporate climate of her company exudes this sentiment. Her employees, are not only good at their jobs, but they share one thing in common…they love their employer. They think the world of her. When they talk about her, their eyes are warm and their smiles genuine. They are all gracious, polite and warm to others as well. And that tells us everything we need to know about this woman. She has managed to retain her sense of self and now it manifests itself in her company.

And she is EXTREMELY successful….not in spite of her values, but because of them. She does not need to demand loyalty, because it is freely given by those in her employ. It has become an integral part of her brand.

I suppose this might be irrelevant to some, but to us it’s a big deal. We feel like we’re not crazy or naive after all, and that it IS possible to be highly successful BECAUSE of your integrity and value system. This is the type of corporate culture we’re determined to maintain and cultivate. The type we hope spills over to influence our community and ultimately global culture. A planet of caring, thoughtful people is the only way we’re going to fix our environmental, social and economic crises. It has to start somewhere…why not in business?…we’re the folks with the resources to make a difference anyway.

Are we too idealistic? I don’t think so. And we’re not the only ones.

Why I Love Living in Savannah: Reason 32

The Genius of Outdoor Advertising