An Evening with Chip Kidd 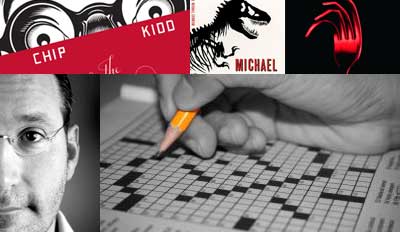 Between around 7:45 and 9:00 last Wednesday night, The Trustees Theater was filled with riotous laughter. The culprit wasn’t a visiting comedian but a Graphic Designer. Actually, Designer/Art Director/Editor/Musician/Novelist is more accurate. Seeing Chip Kidd’s performance that night gave me, to some extent, a sense of reassurance that I’m not crazy for being in this profession, but mostly an acute case of low self esteem.

Working in the somewhat geographic fringes of the design world, it’s easy to tend to idolize my design celebrities; seeing them as super-designers that can do no wrong and somehow transcend the mundane concerns that I deal with on a day to day basis. But one of the strongest impressions that I left with last night was that Mr Kidd was just as much a brilliant problem solver as he was just another designer having to satisfy difficult clients, deadlines and bosses. So it was great to see his more popular work, but any trip to Barnes & Nobles would do that. What really amazed me were the rejected ones.

He showed us comps he designed that were by far more effective than the final layout used but because of one irrational or political reason or another were turned down. It was refreshing to see some of his ideas for layouts that didn’t live up to the “Chip Kidd” idol status I had built up in my head, as well as the laborious process of revising and re-revising an idea to placate a picky author.

His opening advice to a mostly student audience was to dive into crossword puzzles. Why? Firstly because words, like the work of any designer, are essentially just arrangements of abstract symbols to communicate a message. Secondly, because crossword puzzles force your brain to think in ways it’s not used to in order to figure out the clues. Which is good mental exercise to keep the creativity engine primed. To underscore the point he started off with a clue from the New York Times’ crossword puzzles:

The answer to which he promised to provide at the end of his presentation.

Sometimes I have a tendency to play the egotistical designer role. You might recognize it, you submit a design/ comp/ layout and the client says “I don’t like it, can you try… this?” and your immediate response is shock that this mere non-designer would dare suggest to you, the all-knowing designer, that your work is not perfectly brilliant in every way. And to have the audacity to make their own suggestions to, dare I say it, fix it?

With book jackets like Jurassic Park and Dry under his belt, and a reputation that’s garnered a place in the finals of Time’s 100 most influential people this year, you’d think that Mr. Kidd wouldn’t have to deal with the above scenario.

The humbling lesson in all of this was how he navigated this scenario. Instead of going back to his office and pouting and doing exactly what the client asked no matter how bad it looked, he problem-solved until he came up with a compromise that was still brilliant but addressed his client’s concerns.
He doesn’t do this all the time mind you, but it was a good reminder that:

By the end of the evening I had laughed so much that I didn’t even notice I had learned something. That’s a sign of a great presentation.

Design to Change Their Minds