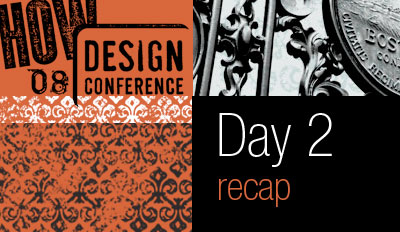 Where Day 1 was physically challenging, Day 2 turned out to be mentally challenging. Eric Karjalouto of SmashLab brought up a lot of thought provoking topics when talking about his firms attempt to be more responsible about their practice.

He spoke about the paradigm shift currently taking place from the “produce and consume more” mentality to “conserve and reuse more.” But he challenged us as designers to go further than that. We need to challenge even the most basic assumptions if we’re to come up more effective solutions. Assumptions like if the client asks us for a brochure, do they really need a brochure? Will 3000 4 color brochures solve their problem? What is the problem they think brochures will solve?

He views the designers role as that of a mediator between industry and consumers. Everything that’s consumed today has to go through a designer at some point and the decision to purchase is largely affected by a designer’s work. With that influence we should be able to make green an obvious lifestyle choice (and conversely make being a depletist completely undesirable) without resorting to the “green-washing” that we see so much now. He used the example of vintage clothing. With the right packaging it goes from simply old to chic & stylish.

Apart from the power that our work has, we can also make small changes to our practice that would be stepping stones to more profound impact. Most of these tactics you should be familiar with: printing smaller pieces with less ink, recycled paper, less adhesives etc. etc. But another suggestion was narrow-casting (as opposed to broad-casting). This involves using delivery methods or emotional connections to maximize the effectiveness of communication. Kinda like using a laser-sighted sniper rifle rather than a shot gun. Because of the technology at our disposal (like Facebook) we have the ability to focus the delivery our messages to an extent that increases the ROI significantly. When technology’s not an option there’s always god ol’ fashioned creativity to craft a message that speaks clearly and memorably to the right audience rather than generally and vaguely to as wide an audience as possible. SmashLab’s example of emotionally driven, humorous (you can’t go wrong with humor in most cases) and useful promotional cards, sent in small numbers to a select number of prospects, yielded more responses than their previous efforts mailing thousands of generic “look at us we’re so awesome type postcards.”

One of the main thoughts I left this session with was how big a change our thought-patterns need. Several attendants pointed out the irony (and their disgust) of being at a conference on design, in a session about sustainability, with several booths from paper companies touting their green creds, while massive amounts of paper was (and continued to be) given away in useless swag. Irony that was only matched by the statistic about Earth Day was fast becoming as big a consumer holiday as Xmas. “Save the planet…read about it in my 20 page booklet.”
We can’t solve the problem by doing more of what caused the problem in the 1st place (I’m paraphrasing Einstein here).

Visual Design Process
It stands to reason that I felt like I was back in school in this session, since it was lead by director of design at the University of Austin, Dave Holston. I wouldn’t be able to do his session justice in a few paragraphs just due to the shear volume of information he gave, but of course I’ll do my best.
He started out by justifying process as means of bridging the divide between creatives and suits. We tend to value instinct while business people value systems. But seemingly continuing the themes from yesterday, he underscored the necessity of objective, measurable and accountable steps being incorporated into our workflow. He outlined the stages of an effective and comprehensive workflow while leaving ample room for creative freedom, proving that structure and freedom can, and should, coexist.

Tips for Productivity
Scott Belsky of Behance continued to drill home the often under-appreciated right-brained aspect of this fair profession by outlining some very useful productivity enhancers. He started off by mentioning a few of the typical hurdles we face as idea people struggling to execute our brilliant concepts. Some of the usual culprits are:

Then he listed a bunch of ways to combat them:

So after another peruse through the resource center and a delightful chat with some new-found friends I went off to explore Boston…well as much as I could see in 2 hours. One thing… Bostonians love them some Dunkin Donuts, I think there just as many Dunkin stores as there are Starbucks.