An Evening with Charles Landry

Creating a Crisis of Aspiration. 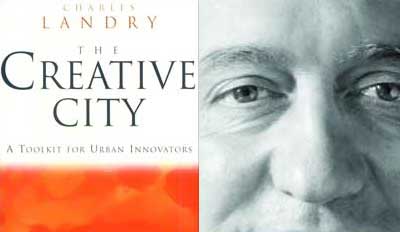 To say that Charles Landry is excited about city building is an understatement. He entertained and informed a standing room only crowd last night at the Trustees Gardens’ Charles H.Morris Center with stories, case studies and ideas from cities around the world. Interestingly enough for a talk on urban planning, charts, graphs, figures and statistics weren’t center stage. Instead, we were treated to a rapid-fire delivery of remarkable photos from his travels as he passionately argued for the necessity of embracing the Creative Economy.

His first challenge to us, as residents of a city incredibly steeped in history, was “What’s the New story of Savannah going to be?” The reality of the world we live in is that everything is in flux. Mass mobility has effectively shrunken the world, the World Wide Interweb makes us more connected than ever before, and the whole production and delivery process of goods and services is changing from monolithic corporate dictatorships to multiple, tiny…umm…dictatorships, (like us).

But within, or rather as a result of, all of this turmoil,… Place Matters.

Which is why Mr. Landry urges city leaders to figure out what they want their Place’s story to be. 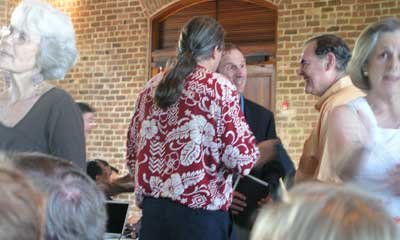 You can recognize that ponytail Hawaiian Shirt combo anywhere

A Central Issue he raised was the need to RE-think everything. The fact that a changing world brings with it new challenges means that new solutions are needed. SO we need to rethink our public spaces, how we build our schools, courthouses, even sewage systems and how we reclaim our discarded neighborhoods. Additionally, we need to rethink our measures of success (not only monetary capital but social and environmental capital as well).

In particular, Savannah needs to rethink the way we do Tourism. Is our current model as sustainable or efficient as it could be? Landry suggested a new model of “civic tourism” being used in other cities like Savannah who rely heavily on it’s perception as a tourist destination. The idea is that people would rather be treated as guests than merely visitors. Think about how you’d feel if on your next trip to a strange city you were greeted by a family of locals who showed you around and basically adopted you for the duration of your trip. How much more fun would that be? Also, how much more likely are you to return? or better yet return the favor.

He went into some qualities of Creative Cities which mostly boiled down to (here’s that r word again) rethinking the role of a city not as a machine but as a biological organism. “A living work of art” that sets itself apart by not striving to be the best city in the world, but the best city for the world. This new paradigm would reflect itself in our laws, architecture, even signage. 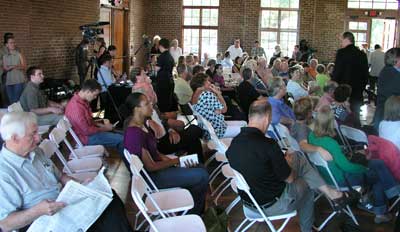 Just half of the crowd that showed up last night

The challenge that faces any proponent of building a Creative Economy is convincing traditionalists of its necessity. As a firm who’s always trying to justify the ROI of design in business, trust me, we can relate. But confronting challenges in unique ways is what we Creative types do best… right?. The same innovation skills required to solve our societal issues are the ones required to convince the leaders that we’re the ones that can do it. Mr. Landry himself has changed the way he approaches the subject. He no longer tries to validate a Creative outlook to city building, but underscores the cost of NOT valuing design, arts and cultural expressions.

His closing advice was the one that resonated with me the most. In answering a gentleman’s question about motivating cities to change, he, realizing that we humans respond best to crises, suggested we create a “crisis of aspiration.” Usually we change our behavior as a reaction to a perceived or actual negative outcome. (Stop smoking or you’ll die, decrease your carbon footprint or…well… you’ll die). But as creatives, our first mission is to create a vision of who we want Savannah to be and stir up a sense of urgency in our community for that positive outcome. The driving force being the collective excitement about that goal, rather than our shared dread of some catastrophic repercussion.

Kudos to Chris, AASU and everyone else who was responsible for bringing Mr. Landry here. 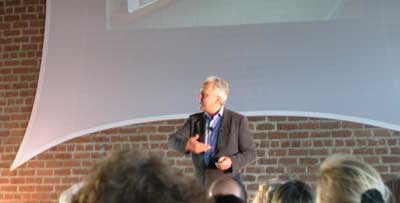 The man in action

4 thoughts on “An Evening with Charles Landry”

A New Tool for the Eco Conscious Designer