Ikea Teams Up With Velorbis

Offering eco-friendly bike-trailers to their customers.

When retail giant Ikea discovered that 20% of their Danish customers were traveling to their stores via bicycle, they teamed up with bicycle company Velorbis to offer eco-friendly bike-trailers to their customers. These can be rented at the store, and since most things Ikea are flat-packed anyway, they’re perfect for hauling home purchases.

The bikes are well-made with classic saddles and pimped out with the Ikea brand in every possible way. Aside from the eco-friendliness of the concept, it’s a great way to get more visibility (not that they need it). And I suppose it doesn’t hurt that their customers will probably be fitter as well.

The first location for this new offering is one store in the Copenhagen area, however there are plans for expansion. 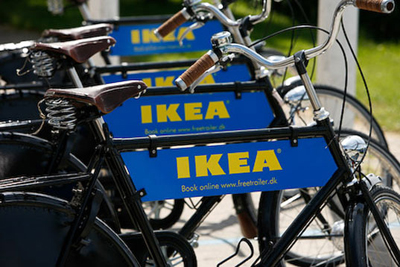 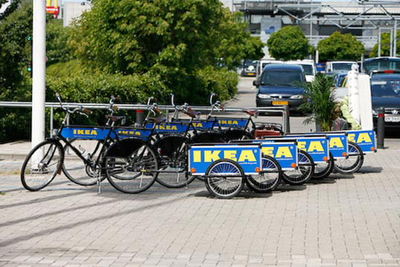 I think this is an amazing idea. Mind you, I would not attempt to ride my bicycle from Ikea in most US cities. Just thinking about attempting it from the Ikea in Atlanta makes me break out in a cold sweat! If we had an Ikea in Downtown Savannah though (yes I am aware that is a massively wild and improbable suggestion), I could totally see this being helpful.

On another interesting note, I also saw on the Velorbis blog that they’ve delivered bicycles to the Parlament in Denmark, and now residents may see their politicians pedaling around town! How cool is that!

I wonder if Mayer Otis Johnson or any members of our city government would be up for riding a bicycle around Savannah?

A New Tool for the Eco Conscious Designer