The Importance of Being Pretty

Humans only change their behavior if they can see the immediate impact. 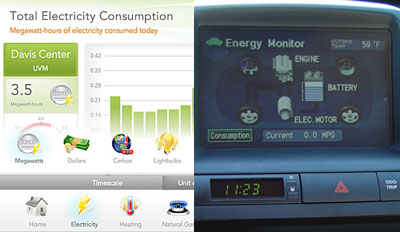 I just got the October issue of Print Magazine in the mail and the Monologue by Jeremy Lehrer deals with the role of interaction design in saving the planet.

The entire article is worth reading, if you can get your hands on it, but I found this section particularly interesting:

“There is some kind of subconscious gratification to knowing that you’re modifying your behavior,” says Marc Alt, a sustainability consultant who has organized conferences on green design. “But this is the unnerving aspect of the global warming issue. Humans are very quick at changing their behavior, but they only change their behavior if they can see the immediate impact. Alt worries that because we’re unable to see how our lifestyles are causing sea levels to rise, for instance, we don’t recognize the urgency of changing the way we live. Interaction design is ideal for developing behavior-modification tools that can put a little Pavlov into the green lifestyle…”

The rest goes on to give examples of ideas, products and sites that accomplish this goal of instant feedback leading to changed action. The chief one being the Prius’ Energy Monitor & Consumption Monitor on its dashboard display which gives the driver indications of when the motor is charging , when it’s most efficient as well as instantaneous miles-per-gallon figures.

One of the most exciting featured products mentioned was the Building Dashboard® by Lucid Design Group.This hardware-software system, along the lines of the Prius’ Dashboard, gives instant feedback on your building’s energy useage, rainwater collection etc. They’ve even combined it with a social-networking component where schools can compete to see who’s less of an energy hog.

Displaying facts and figures is one thing, but what sets this product apart is the use of a simple, eye-catching UI. That not only informs but isn’t ashamed to be nice to look at. It’s always inspiring to read about how designers are significantly affecting human behavior by creating innovative products, but it gives me greater pride when something that seems to be a trivial skill (such as making things look good, pleasing and easy to use) has just an important role.

An Innovation in Airport Security

An Innovation in Airport Security