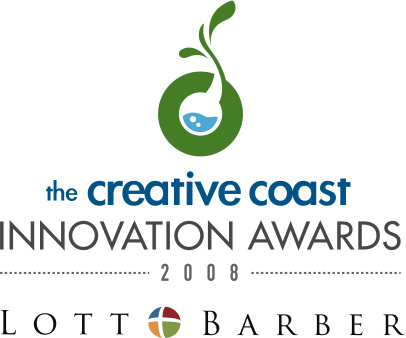 After coming back to the office on Monday morning, all I could say was, “WOW!!!” The Creative Coast Alliance really knows how to throw an awards show! Unless you’re talking about the Oscars or the Academy Awards, award ceremonies fall among the list of events that most dread attending (not as bad as visiting family members you don’t know, though less anticipated than a company picnic). Unless you’ve been nominated to win something, all you can hear is your brain saying: “Oookay buddy… just read through the award winners so we can all get out of here.”

Yeah, it was raining and everything, but all who attended welcomed Mother Nature to the party with opened umbrellas and arms (view pictures from the event in TCCa’s Flickr photo stream).The event after all was centered around her well being, in addition to those who have displayed excellence in innovation. And what better location to send this message than the rustic, Historic Roundhouse. The venue was transformed into this visually inspiring space, where Savannah’s creative community gathered to connect with one another.

Everything was great: the organically delicious food, the aluminum can made stage prop of the Innovation Award’s logo, actual award made from post consumer materials, Rick Winger’s candid remarks, and especially the breakdown of how the event was kinder to the Earth than most by Tommy Linstroth. I left that evening with a good feeling in my gut and a sense of pride for the Creative Coast I live on.

Not only can the man stare down CSS code until it writes itself in sheer terror, but he is famous around 220 E. Hall St for what we like to call his “happy dance”. Few have seen it, and those who have can’t get enough.

What's A Designer To Do?