Kickstarter – A New Way To Fund Ideas and Endeavors

A good idea, communicated well, can spread fast and wide. 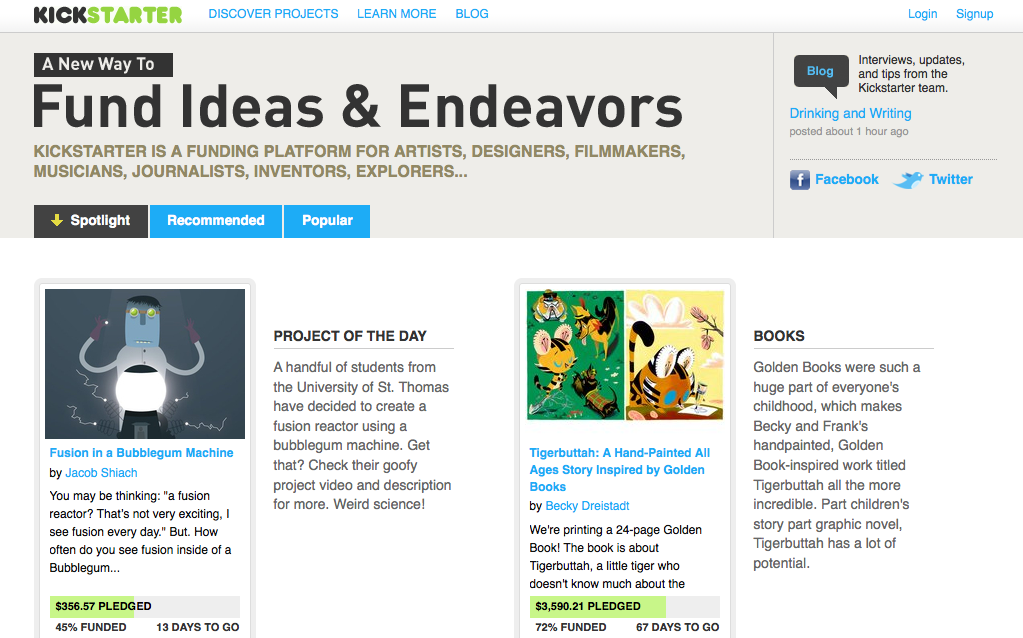 There’s a common theme that seems to apply to more than one conversation we’re having around the office of late: community funded projects. You’ll be hearing quite a bit about this from us in the coming weeks.*

I love the way they introduce themselves:

* A good idea, communicated well, can spread fast and wide.
* A large group of people can be a tremendous source of money and encouragement.

Simply put, Kickstarter is a way for creatives to receive (online) community funding to execute their ideas.

It’s quite clever: a filmmaker, artist, musician, inventor, etc submits an idea along with a request for the amount of money they need to make their concept a reality. The online community is able to review these ideas and if so inclined can pledge money to help make them happen.

The creator is able to propose any type of reward system they’d like as a “thank you”. This could be as simple as access to ongoing project updates or something fancier like a T-shirt or an invitation to a party. Regardless, the creators retain full ownership of their ideas. No politics. No big investor demanding final sign-off on production.

But here’s the part that I really love. No-one’s credit card is charged up-front. ONLY if the total amount requested has been pledged within the specified time frame, is the money actually collected. Once the mark is hit all the cards are charged at once. This way a filmmaker is not obligated to make a $6000 independent short for $2000 if that’s all he was pledged. It’s an all or nothing scenario.

If you’ve got a brilliant idea and need a cash to give it wings, perhaps Kickstarter might be the place to go. They charge 5% of the pledge goal, so you’ll need to factor that into your budget.