Laptops Needed for a Good Cause

I love the fact that over the years we've gotten to know so many generous people who care about making a difference in the lives of others.

I love the fact that over the years we’ve gotten to know so many generous people who care about making a difference in the lives of others. If I was ever tempted to become completely self-involved, those people would inspire it right out of me. Today I thought I’d share a story about one of them, Malcolm Boyanton.

Malcolm is a friend and colleague based in Seattle who works for a software company, and I noticed recently that he’s been requesting old laptops. I thought I’d get in touch with him to see what was afoot.

Well it turns out that he’d been planning a trip to South America, and after hearing about the earthquake in Chile (and first-hands reports of dire need from his buddy Ariel Stamm who has been there for the past month) he’s decided to make the first part of his trip a philanthropic stop in that country. And he’s doing it by putting his geeky skills to use.

“There are a lot of schools and families without access to any computers. So, when I leave in a few weeks I want to stuff my bag full of supplies and laptops. I’ve got a couple that were donated and then I’ll likely buy a couple more off people I know or craigslist….All laptops will be given out to rural schools with little or no access to computers.”

How cool is that? I don’t know too many people who have taken their vacation time to go do something so generous. I’d really like to support his efforts. 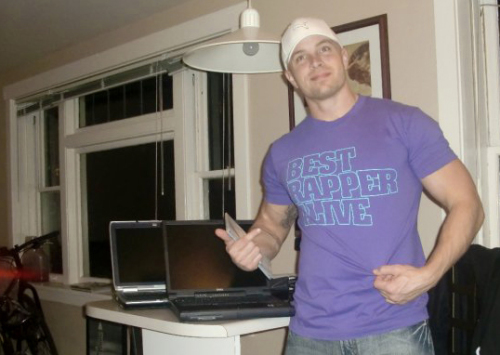 Malcolm working on a few of the donated laptops. Nice shirt!

If you’re a regular reader of our blog then you should already be familiar with AWOL (All Walks of Life) a non-profit here is Savannah with an IT program that takes old computers, refurbishes them and gets them back out into the community to people in need. Along the way, the kids in the program are building self-confidence and learning life and job skills. You can read our most recent post about them here. Their program is working extremely well.

Our friends at AWOL who generously stepped up in February to donate proceeds from their hip-hop play towards Haiti relief efforts (despite being in need themselves), have AGAIN made me proud by stepping up and offering to help Malcolm by building a few laptops using working parts from the laptops donated to them. Aside from being some of the most caring people I’ve ever met, they are teaching the kids in their program about social responsibility, and showing them that no matter how hard you think your life is, there is always someone else who’s in worse shape and could use your help.

So, what about you?
Do you have an old laptop you’d like to donate?
It needs to be in working order of course, but if you step up to donate a laptop, I’ll cover the cost of sending it to Malcolm. Leave a note in the comments and I’ll contact you via email.
He’s leaving the third week of April.