Three weekends ago, a small group of intrepid explorers, dubbed themselves “8bit RAMpage” and set out on an adventure to conquer an idea they’d been talking about for years…

That group consisted of the Paragon team (Phil, Drew and me, with design support from James), Akash Ramlogan, Blake Ellis, Opie Cooper, Hannah Bryan, Murray Wilson, Matt Adams and Sherry Spencer. The adventure was the making of a “just for fun” film project that we finally did, thanks to the 48Hour Film Project. 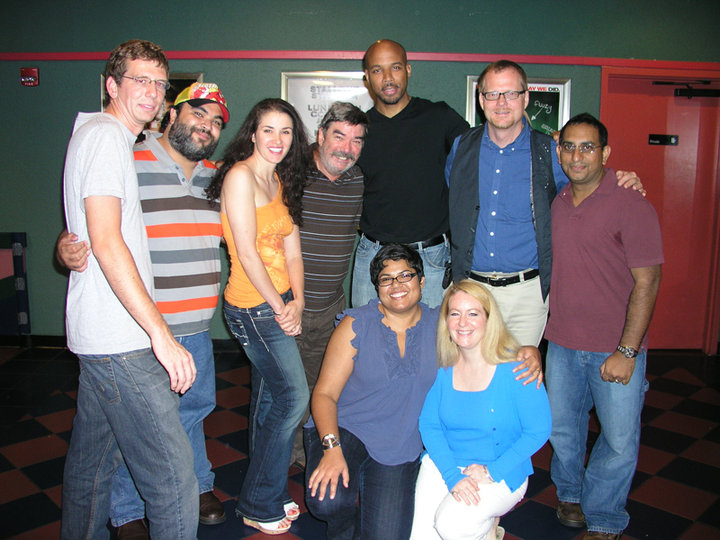 At the screening minus James and Phil

The assignment, given on Friday (July 9th) at 7:30 pm was:
Genre: Road Movie
Prop: an apple
Character: Realtor named Simon/Simone Turkana
Line: “I know what I know”
All the teams shared the same requirements except for the genre. The deadline was of course, 7:30pm on Sunday!

We’d done as much prep as was possible during the week — had a number of locations scouted, some great options for our cast and what we felt was a pretty kick-ass (albeit mostly out-of-practice) team.

On Friday night from 7:30pm to about 1:00am we worked out our story. We had some pretty wild ideas…like adding special effects (VFX) to a 48hr film…and we figured that we were going to go for it. We decided that Opie and Hannah would be our lead actors, and that Murray would be our supporting character, Simon Turkana. The rest of the crew could step in as extras where needed. Simple enough.

With the story worked out we began writing the script, shooting green screen sequences and beginning the VFX, so that by 7am on Saturday morning we were doing the read-through, refining our shot-list, prop-list and general scheduling. Then we spent from around 8:30am until 7:30pm shooting. Thanks to good planning, Akash was able to leave with some footage by midday to get cracking on VFX. When the shoot was done, the rest of the team jumped immediately into the editing and joined in on the effects.

We were moving forward at a pretty good clip that night and into Sunday: editing in one room, VFX and sound in another, music composition in another. Around the clock, working through the night.

Well, right around 5pm on Sunday everything went to hell in a hand basket.

…we started having rendering issues (it always the damn rendering!)

….and then we had output issues (because why not?!).

You could cut the tension with a knife, and I don’t know about anyone else, but I was starting to think that I might need to be medicated. All I could do was watch the minutes go by and try not to get in anybody’s way. There was a lot of cussing. Though everyone kept their cool with each other, off in the various corners of the office you could hear mutterings of the foulest language possible.

And then…we FINALLY got the first of 2 required DVDs burned around 7:10pm. SUCCESS!

At 7:24pm I jumped in a car with Blake and we sped over to the drop-off point, Leopold’s Ice Cream. Well, we tried to speed. Instead we caught every light. But I guess we drove pretty damn fast in between, because I delivered the DVDs with about 2 minutes to spare!

When we got back to the office, the whole team watched our final movie for the first time. Of course we saw everything that was wrong with it.
We didn’t care. We’d just made a movie in 48hours, and even though it was far from perfect, we’d completed it in time. And we’d all survived.

And here’s the thing…
Those last 2 hours were my proudest of the entire weekend. Our team managed to problem-solve their way out of debacle after debacle. We came up with work-arounds…and work-around for those work-arounds. Then we had a work-around plan A and a work-around plan B happening simultaneously. We had to make some tough calls about outputting imperfect segments. But it was done. We managed to “not let the perfect be the enemy of the good”. For a group of perfectionists and type-A personalities, the fact that we pulled it off and was big deal.

And that called for a champagne toast…(quoting Drew) “To the worst thing we’ve ever been proud of!”

Here’s a gallery of the chaos (minus those last few hours when we got too busy to take any shots).

Since it’s probably just our moms reading the blog anyway, I thought I’d end with the big news from last Friday (July 23rd): WE WON!!!
– Best Directing
– Best Editing
– Best use of Character (for Simon Turkana)
– Best Acting (Hannah Bryan)
– Audience Choice (voted on by the public at the screenings)

and the big daddy of them all – BEST FILM!! 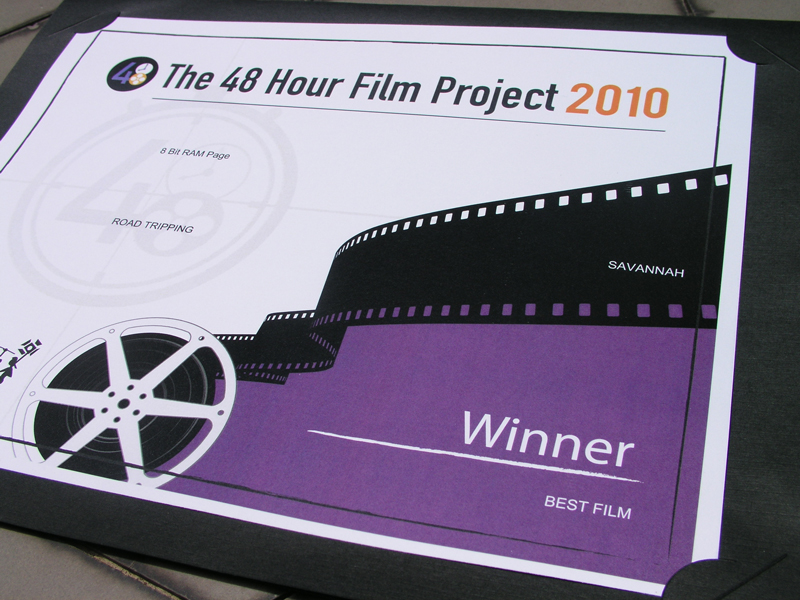 For a ragtag band of out-of-practice filmmaker-wannabees, that’s not half bad!!

Next, our film goes to Vegas for Filmapalooza, the nationals for 48Hour Film Project. Additionally, we will be participating in the International Shootout, the worldwide version of the 48Hour Film Project.
And I guess I should probably mention that if we’re in the top 10 our film goes to Cannes…though right now I think that sounds a bit far fetched.

We’ll post the film online soon, along with some behind-the-scenes footage.

Anyway, thanks to all the folks who made the Savannah 48Hour Film Project possible…in particular Tyler Reid, Savannah producer for the event, and Ryan Watterson of the Savannah Film Commission.
This was one of the funnest, hardest, most exhausting, most exhilarating experiences ever.

Once we’ve had a few months to sleep it off I think we’ll be ready for another one.

Necessary Ingredients for a Good Party: Booze, Ice Cream and Friends to Share them with

Necessary Ingredients for a Good Party: Booze, Ice Cream and Friends to Share them with