Instead of compromising the design of our letters to force connections, they will do what lettering artist do. 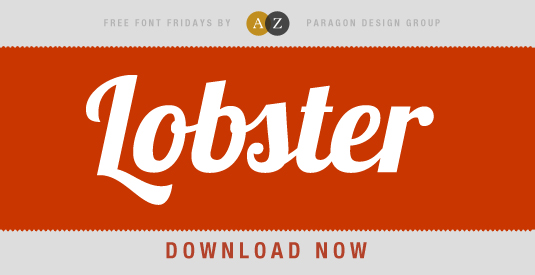 A lovely Bold Condensed Script fully loaded with hundreds of ligatures and alternates.

A common problem that affect most script fonts, is that each letter must be draw in a way that connect with the next and previous letters. And that’s quite difficult.

By having 26 lowercase character, that gives you more than 600 possible combinations for each letter (and arround 15600 for the whole alphabet). It’s next to impossible to make it always connect seamesly whitout compromising the shape that each letter was originally intended to be.

That’s why trying to make script fonts works it’s like magic.
Font designers use all kind of tricks to make it work. But, in the end, the results always compromises the shape of the original letters to make the whole alphabet work together.

Lobster Designers took a different approach.
The new Open Type fonts give us the possibility to have multiple versions of each letter, and that’s exactly what they are going to do: Instead of compromising the design of our letters to force connections, they will do what lettering artist do.

How To Increase Your Video Viewership