Much has changed in terms in our understanding of the contextual and archeological message delivered by that long dead body compared with when Heaney wrote the poem in the 1950s.

Irish Poet and Nobel Literature Prize winner Seamus Heaney died last week. As an English Literature Major I sat at my desk the morning I heard and tried to remember a poem across the vast field of time that has passed since I read one.

Punishment, written about an Iron Age body found in a bog in Windeby Germany in 1952 – something of a recurring theme for Heaney – was the one I conjured up. That line about tugging at the nape stuck somehow.

So I tracked it down to read again, and learned that much has changed in terms in our understanding of the contextual and archeological message delivered by that long dead body compared with when Heaney wrote the poem, and even when I first read it back in (Lord) 1988. Earlier even if it showed up in a high school anthology. 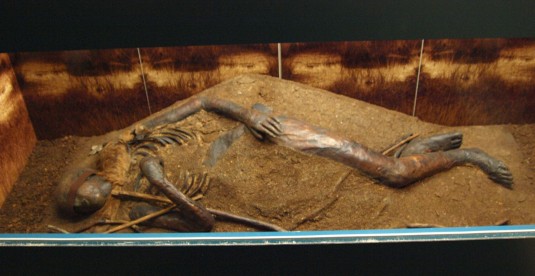 Punishment
I can feel the tug
of the halter at the nape
of her neck, the wind
on her naked front.

It blows her nipples
to amber beads,
it shakes the frail rigging
of her ribs.

I can see her drowned
body in the bog,
the weighing stone,
the floating rods and boughs.

Under which at first
she was a barked sapling
that is dug up
oak-bone, brain-firkin:

her shaved head
like a stubble of black corn,
her blindfold a soiled bandage,
her noose a ring

to store
the memories of love.
Little adulteress,
before they punished you

you were flaxen-haired,
undernourished, and your
tar-black face was beautiful.
My poor scapegoat,

I almost love you
but would have cast, I know,
the stones of silence.
I am the artful voyeuur

of your brain’s exposed
and darkened combs,
your muscles’ webbing
and all your numbered bones:

I who have stood dumb
when your betraying sisters,
cauled in tar,
wept by the railings,

who would connive
in civilized outrage
yet understand the exact
and tribal, intimate revenge.

Experts at the time the body was found thought she may have been an adulteress whose head was shaved, after which she was blindfolded and drowned in the bog. This is one of the stories Heaney tells in his poem, there is also political commentary, as he explained years later:

However in 2007, Prof. Heather Gill-Robinson, a Canadian anthropologist and pathologist used DNA testing to show that, far from being a 14-year old girl, the body was actually that of a male. And that the hair had been lost perhaps during the removal from the bog, perhaps by the passage of time.

They all heard the wrong message.

Happily, for Heaney, his interpretation still has value. Fine art comes with that sort of latitude baked in. Not so when you’re crafting commercially.

It’s vital to hear the message correctly in order to package and deliver it. As a design firm, we are focussed on listening to what our clients want and then crafting something that meets the brief. That can be tricky, though, because while we all broadcast information, both through what we say and how we say it, often times there is still some decoding required.

Studies show that verbal impact of communication only accounts for 7% of your overall message. Bulk of communication comes across in our appearance and body language, comprising 55%. Tone, speed and inflection of our voice make up the remaining 38%. You need to be a whole-body listener.

So. There are lots of tips out there on how to listen. Here are some, as a former journalist, that I rather like:

These are courtesy of Guy Harris, Chief Relationship Officer with Principle Driven Consulting who blogs here.

And while we’re thinking about listening, back to Heaney now, because it’s always cool to hear a poet reading his own work. Here’s The Underground.

The Eyes Have It