They matter. We have one around here we call the Holiday Mailer.

We have one around here we call the Holiday Mailer. It’s our annual flexing of the collective brain for our brand. And while everything we do is really an exercise in branding, this end of the year project  is one we look forward to. It’s a combination of highly enjoyable and maddeningly stressful, but the results are always worth it, we think.

It all begins, usually some time in October when  Halloween still seems a way off, never mind the cluster of holidays in December. This year, it all started with a box. Several boxes, actually. Susan built one. So did Drew. And I’d totally show you one except you’d be deafened by the howls of these creatives wailing in agony that I posted something quite so… Rough.

Anyway – we all tested them thoughtfully and though we had been sure it was where we would begin, we ended up launching in another direction and in the end we decided to combine some rather old technology with something much, much newer.

A book, with a hidden tale behind the familiar Holiday story which would be revealed in a series of animated shorts.  And in order to watch those, you’d have to whip out your phone and scan the QR code on each of the spreads in the book. 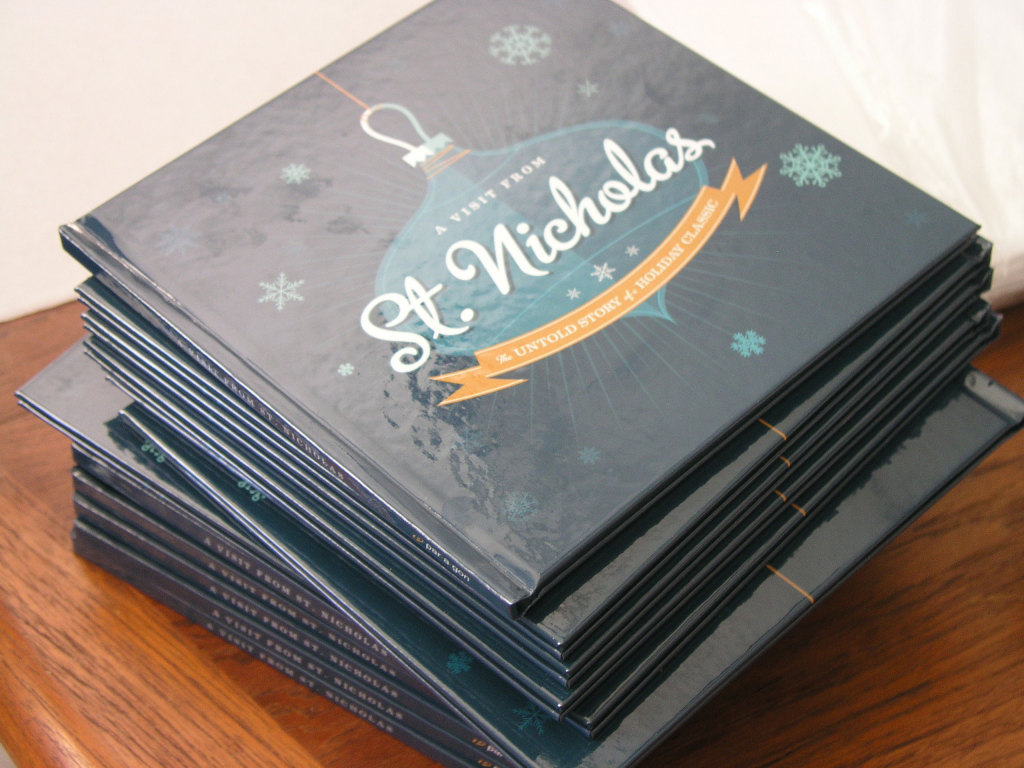 (And speaking of process, three sets of parents were polled on exactly what the BEST shape for the book might be. Baby head circumference and parental arm length turned out to be the critical axes in the geometry calculations. I think that would make a valuable infographic, you know.)

And there were a bunch of other steps and decisions and discussions in between. Of course. 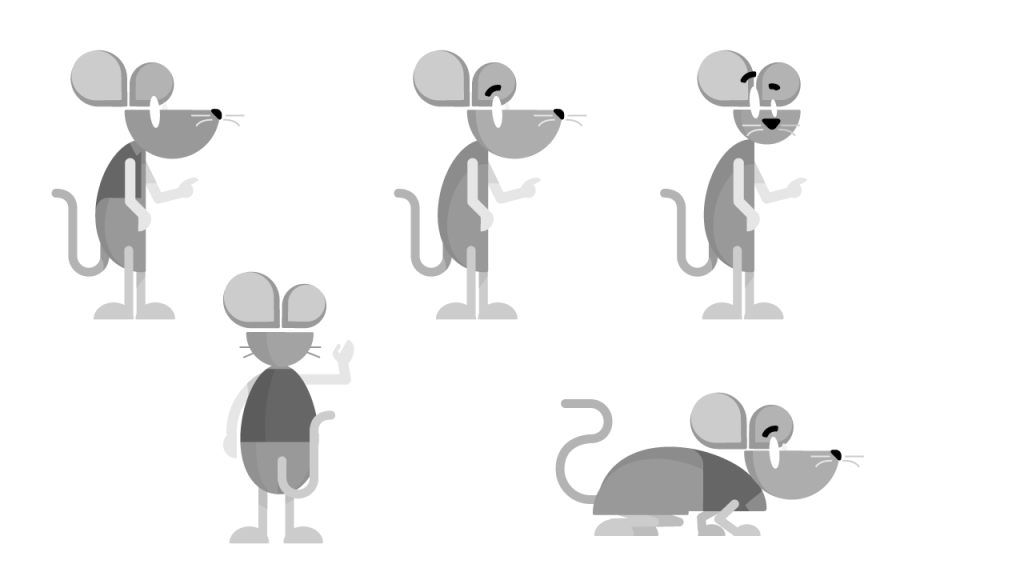 And we needed a villain, but not too much of a bad guy. Here are a few iterations for the coveted cameo. 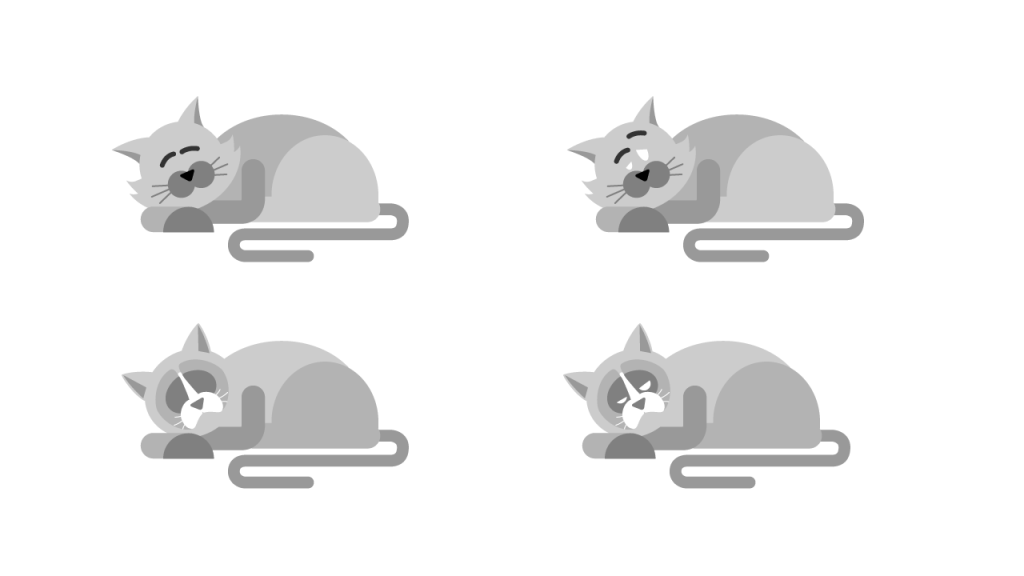 See what we did there? Who could risk an homage to that internet super-celeb? Not us. Oh-my-goodness-no. (And she was thrilled!) 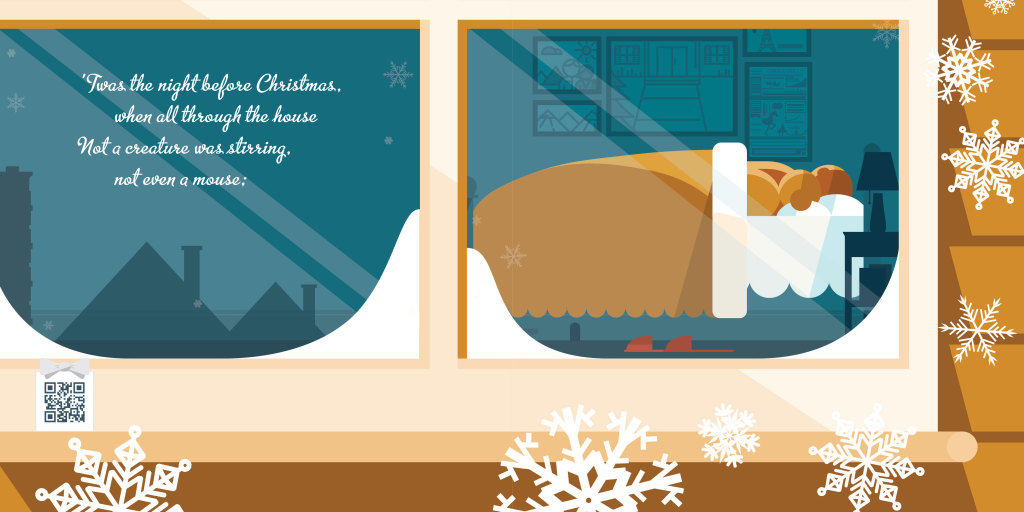 On the bedroom wall is our 2010 Holiday Mailer, the  Jingle Bells Letterpress Poster . 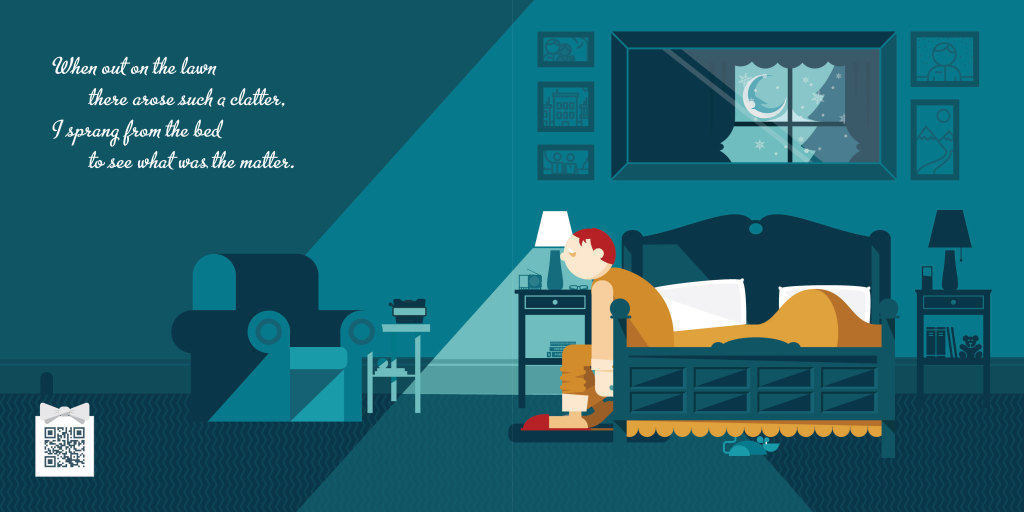 Parents everywhere agree, you can try but you can’t keep the kid’s toys from taking over. On the side table is a View-Master, aka the 2011 Holiday Movie View-O-Rama.

Is that a set of Matryoshka dolls there on the mantle? No! Close. It’s just us reaching back in time to the 2008 Holiday Mailer. 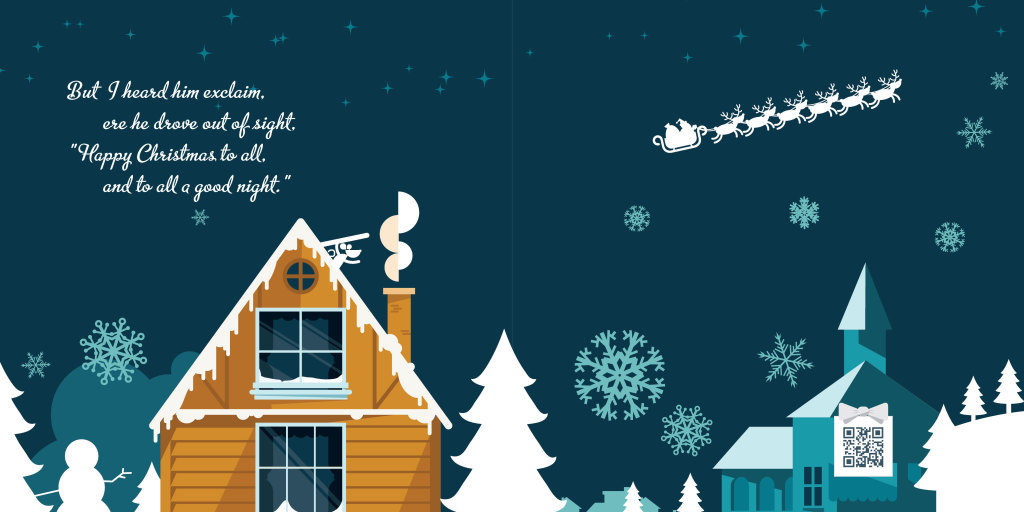 And if you’d like to watch the tale within the tale – here you go!

Of course, just getting the animations completed and a website built and a book published were not the full list of steps from concept to completion. Oh no.

The final step of the Holiday Mailer Decathalon is… The assembly and mailing!

Always a mad dash to the finish. We started out with an accompaniment of Christmas Carols, but around the half-way mark we needed Bob crooning “Everything’s gonna be all right” to help us hold it together. 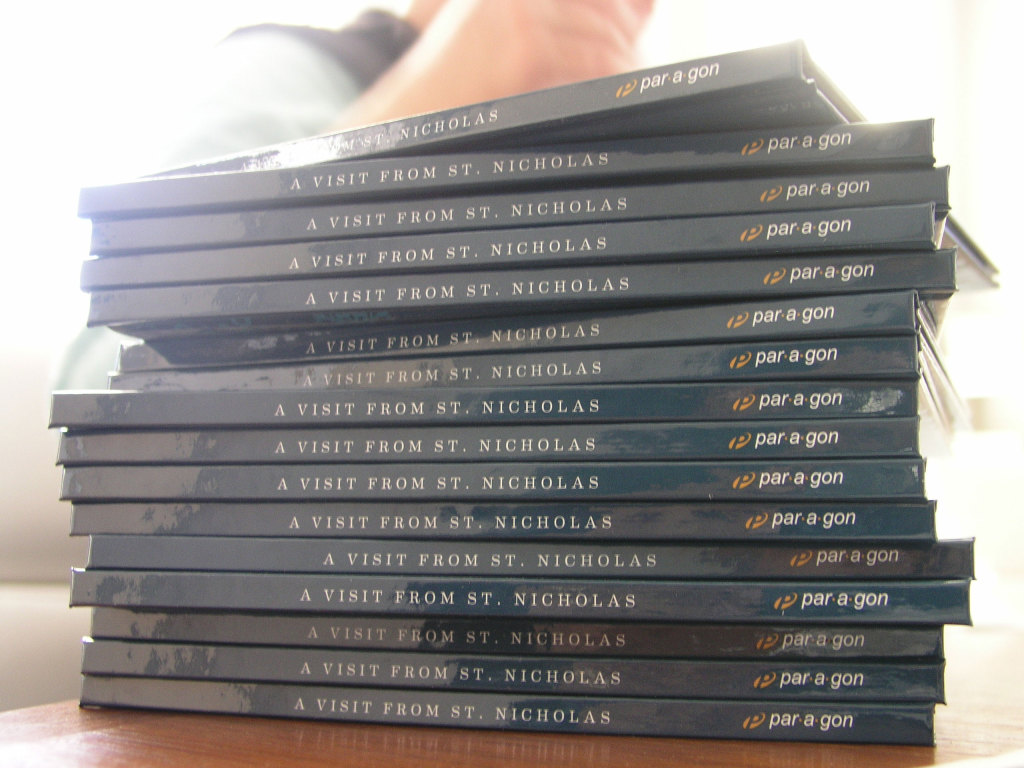 And we made kids everywhere proud with our level of commitment to the packaging process, neatness be damned. 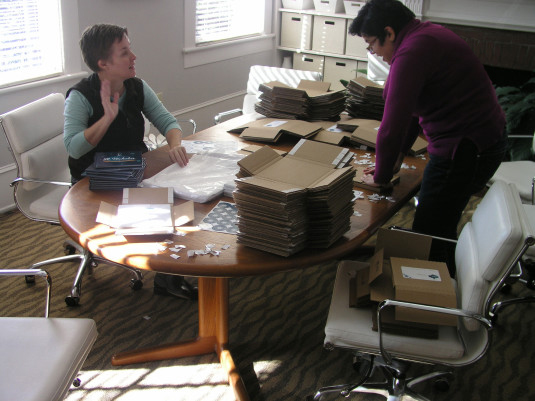 Stop in the name of love? Sorry – there’s no time. 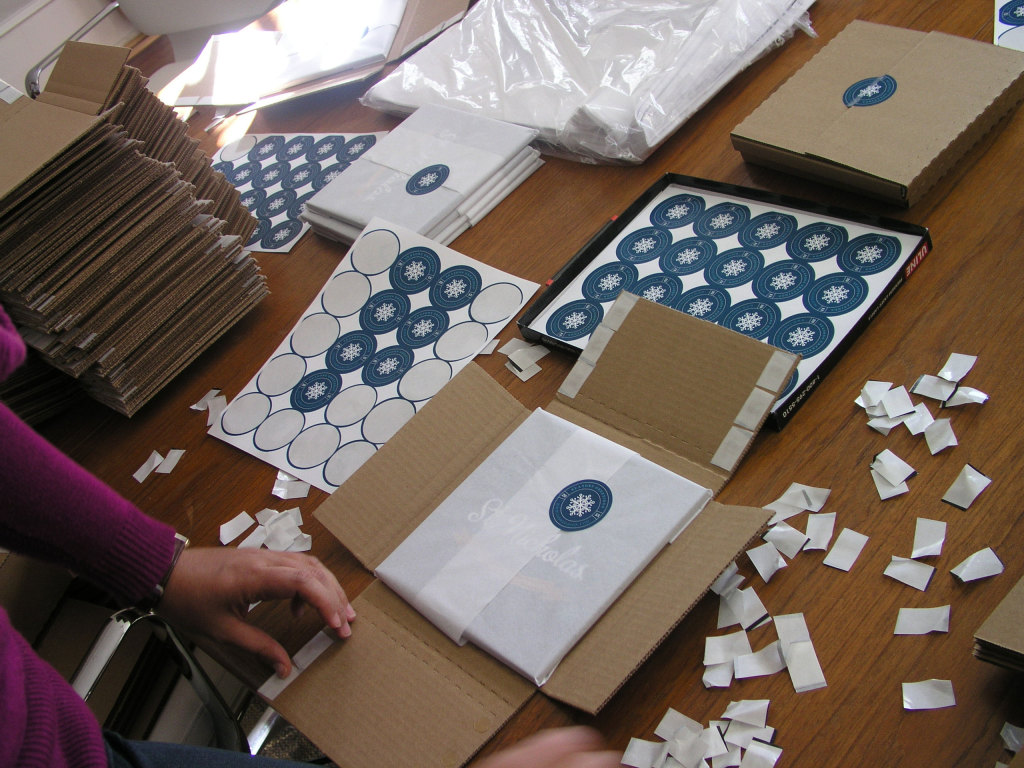 So. Many. Glue. Dots. Did I really cut those out individually when a strip of three would have been more humane? I did. It’s a long story. Not quite as long as the amount of time it took to peel off all those little squares of paper though. It was a mistake. I apologized. A lot.

And one final Easter Egg for you for making it the whole way through this long blog post – and it comes with a warning – Brace! Your! Ears! And test your reflexes!

Someone at the office has the high score – but it sure as heck isn’t me.

Our Adventures at Southern Fried SXSW 2014