There is nothing new under the sun, the saying goes, but sometimes an old idea will catch fire when it didn't before.

You’ve no doubt heard, or perhaps I should say, you can’t have missed that the ALS Association is having something of a banner fundraiser this year. $41.8 million, and rising at last count. A 1100% increase in year-over-year donations. Thanks to presidents, sports stars, celebrities and your neighbor dumping a bucket of ice on their heads.

Now, this is actually the SECOND ice/cold water challenge of the Summer. This Summer. You don’t remember the first one? Neither did I.  But in June folks were encouraged to endure a bucket of cold water for breast cancer awareness, post a video within 24 hours, nominate three others and donate. According to a piece in Forbes magazine, that campaign accumulated around 142,000 retweets after 20 days. The #ALSIceBucketChallenge topped that tweet total in about an hour on Monday afternoon. (Admittedly one of the better time frames to tweet. But still.)

Peter Frates, a man with ALS  in Massachusetts, heard about this breast cancer campaign and decided to adopt it while upping the ante to include ice. He challenged a couple of friends in the Boston area and it took hold hard. According to Frates’ dad, the family had been trying to come up with something they could do to raise awareness for years, a real challenge for rare diseases which afflict relatively small numbers of people. Who knew it would all come down to a bucket of ice. (Boston.com has a piece on Frates along with a video of him being iced.)

The ALS Association is understandably thrilled by the response.

“I know that many people are wondering what The ALS Association is going to do with these donations,” Barbara Newhouse, ALS association’s CEO and president said. “My answer is this: invest prudently in helping people with ALS and their families and caregivers in the battle against the disease, while resolutely pursuing all avenues to extend, improve and ultimately save lives.”

And honestly, good for them. The increased awareness alone should profoundly impact the work they’re doing for people affected by this devastating disease.

ALS affects around 30,000 Americans. Some 200,000 American women are diagnosed with Breast Cancer. Annually. To be fair, some $6 billion is dedicated to breast cancer research each year.

But what has struck me most is not whether it’s fair or right that one relatively rare disease should  take such a significant slice of what is surely a finite thing: the public’s capacity to give. If you want to read about that see Michael Hiltzik’s piece in the L.A. Times. It’s why this bucket challenge, and not the earlier one? Which I guess gets us to that all consuming question for marketers which is, what makes a campaign go viral?

Well. While Pete Frates had a plan, it’s not clear the ALS Association did at first. It’s interesting to look through the press archives and see the usual suspects happening every few weeks and then first release about the Ice Bucket challenge hits after the donations began coming in. They may not have been leading initially, but you can see that they mobilized and got a plan together and got on it. They even have social media badges for the brave. 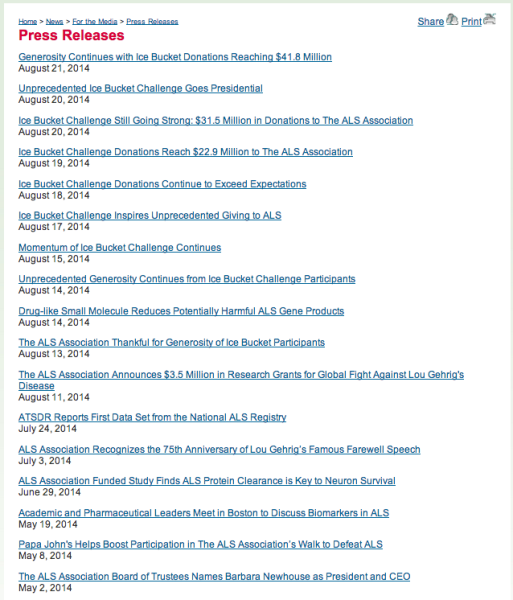 I couldn’t find any official releases or statements on the cold water challenge for breast cancer. And that could be because I looked in the wrong place – there are a multitude of cancer advocacy groups and I don’t know who was leading this one. Even if it is out there, I couldn’t find it, so, point goes to the Ice Bucket challenge.

Or get people to want to engage. Influencer buy-in seems to be a really critical driver here. I have done a fair bit of Googling, and for the most part, I can find a bunch of Jane and Joe Publics getting all chilly with the cold water to raise money to fight breast cancer, but I couldn’t find anything like the celebrity muscle weighing in on the Ice Bucket challenge. Ice Bucket knocks it out of the park on this one.

But not too easy. Maybe the ice appealed more to our hardy American pioneer spirit. Cold water, well, that’s OK, I guess, but ICE! That’s really daring! While still being safe! Well.  Apparently there have been one or two concussions reported, no doubt the fault of an over-enthusiastic dumper, or perhaps ice cubes that had coalesced into a giant bucket berg. (Since writing this, more serious, if tangential injuries have been reported). But really this makes for a doable, mostly low-risk,  low effort endeavor (although tell that to the Foo Fighter’s and their Carrie inspired offering) for participants. To be fair, both challenges were doable without tremendous effort. But perhaps a little more effort is better. We do like a little bit of a challenge. Ice Bucket wins by a nose here.

Both challenges required more than just the hitting of a like or share button. Required some ownership. And ownership is better than easy buy in as marketers are beginning to discover. They both had a payoff where you got to nominate others to go through the baptism of coldness.  I’d say it’s a draw on this one.

An additional point here though, and the video I’m going to ask you to watch below brings this up, ALS is a tough disease to talk about. To think about. Most of us don’t do either. Because we don’t have to.Which is not to say that cancer is easy, it’s not, but as a society, I think we’ve become better at talking about cancer. More accustomed to talking about cancer. This challenge allowed people to engage with something difficult. And that can really grab attention.

Looks like Ice Bucket just got some things right-er.

Now. I know you’ve seen a bunch of these. Even if you weren’t trying to watch them, my Facebook feed has been a shrieking mess of auto playing videos of cascading ice. Here’s one that’s worth 6 minutes of your time. Funny, surprising, honest, heartbreaking. What a roller coaster.  (And there’s some adult language, so possibly NSFW.)

The Atlantic has just published a piece that says Boston is the key to the Ice Bucket Challenge going viral – some interesting stuff in here!

Is Marketing Putting the Social Back in Social Media?