Why and how you should get off your lazy bum and start doing your own side projects right now.

You’ve been fence-sitting for a while now, but that idea is still festering in the back of your head or on a forgotten folder on your hard drive. It’s that thing you’ve always wanted to do, but never seemed to have time to get started on; that ever-elusive side project. And if you’ve lacked motivation to crank that bad boy up then you’ve come to the right place. But…

Once you’ve read this post, you’ll no longer have any excuses to keep that idea on the shelf anymore. You’ll have to have a come-to-Buddha moment where you admit to yourself that either you really don’t want to do it, or you’re being lazy. Either way, “I don’t have time”,“it’s not a fully formed idea yet” or “it’s a silly idea that’ll go nowhere” just won’t cut it anymore. TL;DR

Whether it’s for fame, fortune or philanthropy, personal creative projects are beneficial because they give you sense of accomplishment while improving your skills.

But first a lil’ back story.

This past week I had the pleasure of attending the 2nd ConvergeRVA conference in downtown Richmond VA. Although it didn’t necessarily have a stated theme, the overwhelmingly common thread through most of the presentations was that personal projects are the way go and you’d be stupid for not at least trying to do them. If you’re like most creatives, you probably have a pile of dismissed ideas fermenting somewhere, and the speakers at this one day affair were no different. But that’s partly what made the presentations so inspirational. They were coming from a place that most designers, illustrators, developers and other tinkerers could relate to. But what separates them from us is that they simply got off their butts and did something. 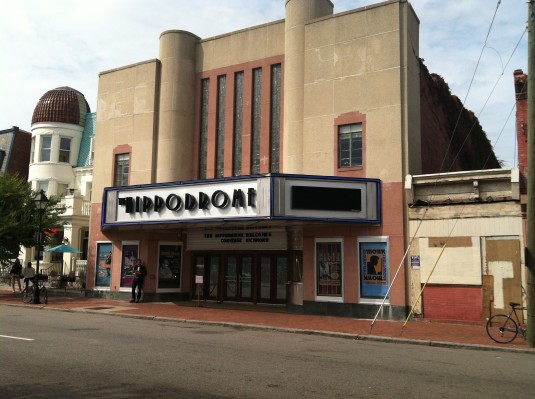 The Classic art-deco awesomeness of the Hippodrome theater 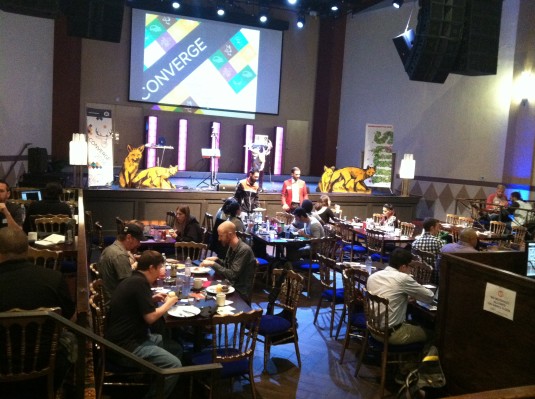 For the Feels and Skills

One of the easiest demotivators for side-projects is the lack of foreseeable monetary reward. Why work for free right? Well, a lot of the times, the exercise of doing something creative, just for the sake of doing it, is it’s own reward. Garth Braithwaite from Adobe is on a mission to encourage designers to work more openly, similar to the open source software ethos. He cited Daniel Pink’s book Drive, which highlighted that our primary motivator isn’t money, but: – to be challenged, – to achieve mastery, – to contribute to something bigger than ourselves.

It might sound trite, but there’s something to be said for the intrinsic psychological benefits of stretching those creative muscles the same way we’ve honed our hand eye coordination from all those marathon Candy Crush sessions. Besides, as Matt Keas put it, most of the times, side-projects are stupid, “and when you treat something like it’s stupid, you have more fun with it and don’t put too much structure around it.” 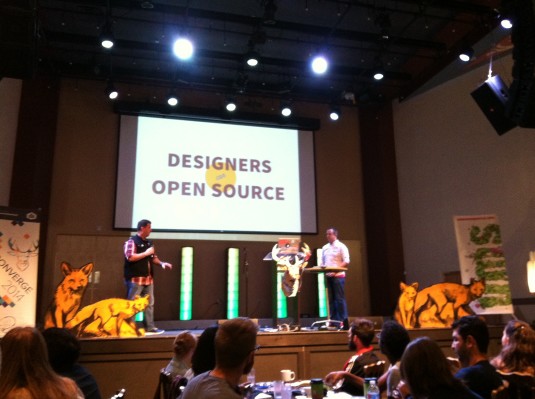 Maybe you’re more socially conscious than that, and you’d get more satisfaction from creating projects that help make the world a better place. Sometimes having a cause to wrap your energy around is more motivating than just simple to hone your chops.

Noah Scalin, spoke about how his skull-a-day project provided a platform that none of his work for direct non-profit clients did. As a result it’s given him the ability to reach a greater audience. His challenge to all of us designers was “do we want to be just hired guns, doing the bidding of whoever pays us, or a megaphone for those whose voices are being drowned out” 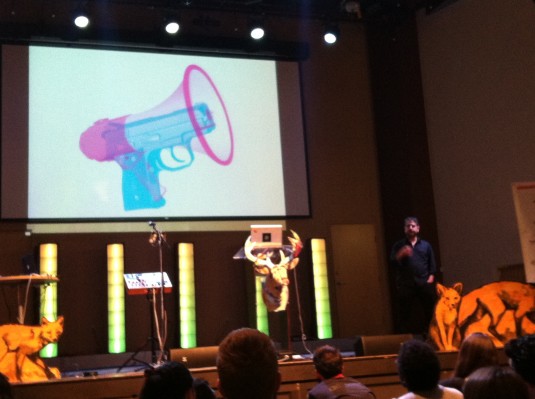 The gut-punch of a challenge from Noah Scalin. 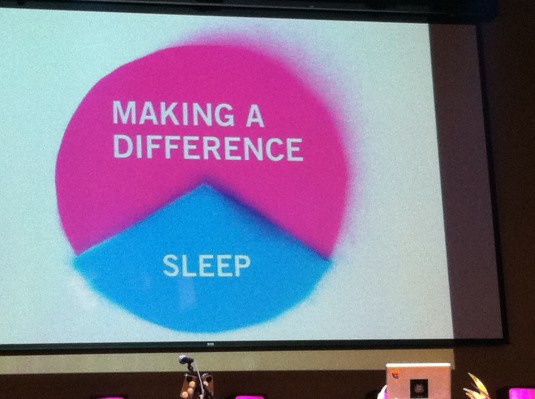 If you’re not noble enough to be inspired by internal or altruistic rewards then how about some good ol-fashioned external validation. Maria Fabrizio, started a blog where she put out daily illustrations based on news headlines and it got her on Morning Edition (for non NPR nerds that’s THE radio morning news show). James White’s personal projects got him a drink with Kurt Russell, a logo on the side of a rocket and even a piece on the inside cover of Newsweek (for the under 20’s reading this, that was a magazine people read some time ago) 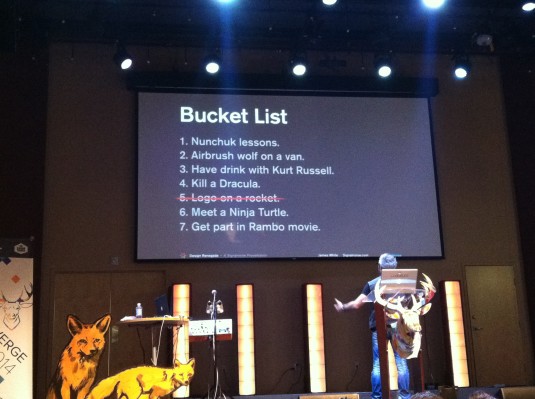 “You never know where your [personal] work may lead until you put it out there.”

Maybe you didn’t need that much convincing as to why you should be doing side projects, but you’re hung up on the logistics. Well here are a few insights the speakers shared with us, in no particular order.

Find a YOUR Niche

It’d be advisable to find something that you’re passionate about, but also not been done to death by other people. When looking for a creative outlet to put his distinctively 80s style to, James White glanced over the usual suspects and tapped in to the often overlooked, totally real, world of professional wrestling as his muse, and thus the Starkade series was born.

Whether it’s a few hours of sleep or your Netflix watching time, something’s going to have to give way to the project. But as long as it’s fun, and you’re disciplined about it, it’ll be worth it. Maria has a morning schedule that starts at 4:45am in order to get her wordless news illustrations done by 10 every weekday. Matt Keas has a black belt level mastery of Trello to keep his ideas and to-do list organized. Whatever works for you, just maintain some form of habit that keeps the project manageable and ideally on auto-pilot. 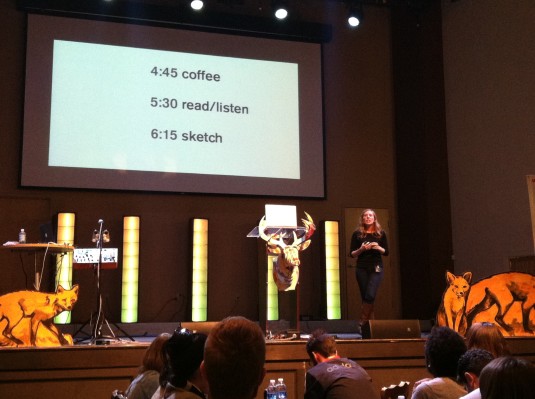 If you’re not used to doing side-projects, or aren’t as self-disciplined as Maria & Matt then starting with a [fill in the blank]-a-day for the entire year might be a bit much to bite off. So start small, with something you know you can handle within a reasonable time frame. Noah Scalin ended his talk by challenging us to commit to doing just 1 thing. Then like any muscle, your ability to handle more commitment will increase as you get the hang of it.

Gym buffs know the value of a spotter and in creative endeavours the principle is the same. Having someone you’re accountable to multiplies your motivation to keep going, and the likelihood of success (however you’re measuring it).

Failure is an Option

Nick Wilson, head of the Analog research Lab at Facebook, told the crowd about a poster series of corporate mantras they created for the staff. One of which said “Done is better than Perfect.” I think we should all have that hanging in our offices somewhere because as designers we’re sometimes guilty of getting hung up on aiming for perfection; feeling like anything short of that will be embarrassing or a waste of time. So we either never finish the piece, or worse yet never start on it due to pride. But if we embrace the fail, and get over ourselves, we realize that there’s a lot to be learnt from those projects we think missed the mark. Besides we can just call those “exercises” and move on. 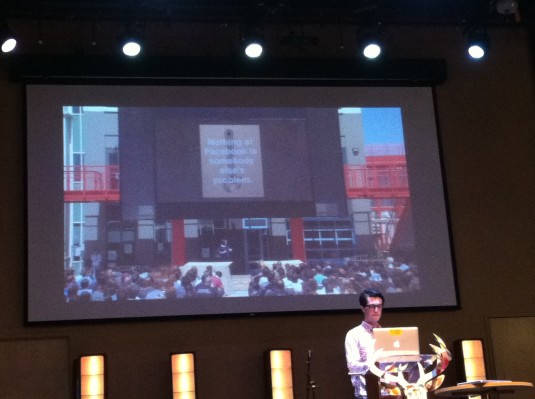 Nick Wilson, showing some of the posters his Analog Research Lab works on for Facebook.

Not every project will get your work on the side of a rocket, but 10 subscribers to your blog within the 1st month? pop the champagne!

It’s hard maintaining the level of motivation needed to follow through on a project, especially one that’s open ended like a skull every day or a news headline every week day. So celebrating the mini-victories along the way is one way to keep your head in the game and minimize the temptation to give up.

For example, Maria Fabrizio shared a story of how her illustration of a fabricated wedding cake for the first gay couple allowed to marry in the US, inspired the actual couple to make a real version of that drawing for their ceremony. Not as flashy as millions of twitter followers, but I’d submit that it’s just as meaningful. 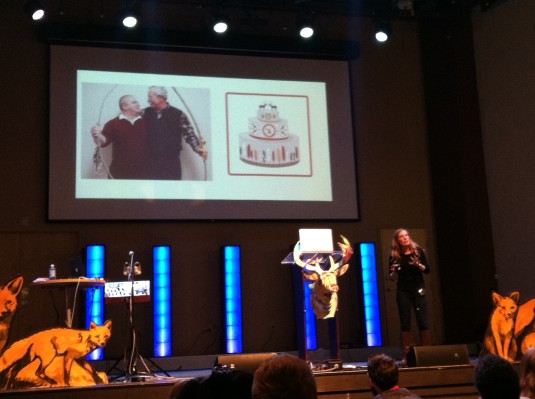 The couple and the cake.

There are no Stupid Side-Projects

James White shared how he felt that sometimes the best ideas for a personal project come when you’re hanging with your friends and someone drops the phrase “You know what would be crazy? if we…” You might not know where it’ll lead, you might not think it’ll change the world, but at the very least are you learning something new? are you having fun? then why the frack not?

“Practice Productive Procrastination. …Take time to mess around. Get Lost. Wander, You never know where it’s going to lead you” – Austin Kleon “Steal Like an Artist”

Observations on the Social Dynamics of Blogging

Observations on the Social Dynamics of Blogging