It turns out that words really matter when it comes to crowdfunding success.

As a group of people who work with people to help them reach people, we spend a lot of time thinking about what works. A recent study on what works in crowdfunding caught my eye. Maybe because I’m a word person, but I found this to be a really revealing look into a business model that really is the marketing process laid bare.

And it turns out that words really matter when it comes to crowdfunding success. A 2014 Georgia Tech study found a clear pattern in language used and funding success on Kickstarter, the world’s largest funding platform for creative projects. To the point that researchers were able to predict campaign success based on the use of certain phrases. And it was what those phrases conveyed as much as what they said that resonated.

Researchers studied more than 45,000 projects to isolate the phrases that pay and  focused on more than 20,000 phrases before compiling a dictionary of more than 100 phrases with predictive powers of success or failure. Suggesting that that the language used by creators to pitch their project plays a major role in driving the project’s success, accounting for 58.56 percent of the variance around success. Here’s a breakdown of those phrase categories

Language in the power poses, right? And here are the top 100 phrases for funded (F) and unfunded (NF): 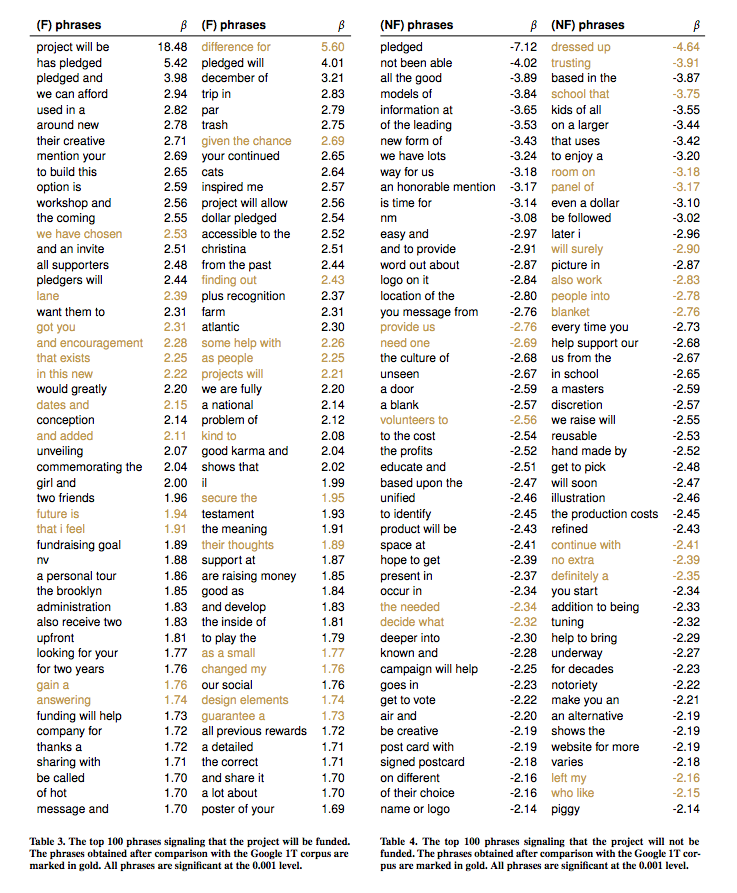 Nathaniel Hansen, Kickstarter Crowdfunding advisor, agrees that the story is everything. But again, he’s talking about more than the words. He means a personal story, he means that the person behind the idea is more important than the idea.

“In a battle between  two ideas, the best one doesn’t necessarily win. No, the idea that wins is the one with the most fearless heretic behind it.”

Of course – it wasn’t only the language. All the projects studied had pitch videos – widely considered to be absolutely necessary. Kickstarter has measured that projects with videos report a higher rate of success than those those without saying that there are few things more important to creating a quality Kickstarter project than a good pitch video, and skipping it will do a serious disservice to the project. Hansen also speaks about how critical video is, from his perspective, it’s also about using that video to share who you are, since that passion is more critical to him than the idea itself.

Social ties were also looked at by reviewing projects that integrated Facebook connections and so to measure whether this affected the likelihood of funding. As you might expect, it turned out to be a powerful predictor of funding success, and it’s something the authors plan to take a closer look at. I’d love to read that study.

Of course, we’re not saying the design isn’t important. It is. But in an age, where we are constantly being told that people read less, it’s fascinating to see a study that shows the degree to which words really do matter in a measurable way.

You can read the full study here.

And just for a bit of context – here’s a screen shot of Kickstarter’s stats page today – and it updates daily.